Taylor Hale became the first Black female to win Big Brother on Sunday during the season 24 finale on CBS.

The 27-year-old beauty pageant queen from Michigan beat out Monte Taylor, 27, of Delaware, and Matthew ‘Turner’ Turner, 23, of Massachusetts, to win the $750,000 grand prize.

Taylor also won an additional $50,000 after she was voted America’s Favorite Houseguest by viewers.

Taylor Hale was named the winner after she easily secured the jury vote by a count of 8-1.

‘This is like winning Miss Congeniality all over again, but there’s a cash prize this time!,’ she said. 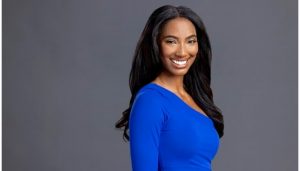 Taylor during her 82 days in the Big Brother house became known for constantly munching on Lays potato chips.

She joked to host Julie Chen Moonves, 52, that she’s ‘gonna spend a lot on potato chips after this’ during her post-show interview.

Monte won the season’s final Head of Household competition and chose to bring Taylor with him into the final two after they formed a ‘showmance’ in recent weeks.

Taylor during her pitch to the jury comprised of nine previously convicted houseguests focused on her abilities to persevere despite being bullied on the show and facing eviction six times.

‘I have bandaged myself together every single time and gotten up and continued to fight, because like so many other women in the world, that is what we have to do to get to the end,’ Taylor said.

‘I’m more than my wins in this game. I have overcome so much in this game and I have come to understand that I am not a shield, I am a sword,’ she added during her impassioned speech.

‘I am not a victim, I am a victor. And if there is one word that is going to describe the season it is resiliency. And if you were to ask yourself who was the most resilient person of the season, it was me,’ she said.

I’m challenging you jury members to choose persistence as a reason to win this game. Change the course of this game,’ Taylor added.

‘As€xual’ p.o.r.n star who made her name in adult films now wants them banned

Baba Ijesha recounts having sex with Princess in court,…