A group of 14 Black American women, known as Sistahs to the Summit, made history two weeks ago when they conquered Mount Kilimanjaro.

The tallest mountain in Africa and the highest free-standing mountain in the world, Mount Kilimanjaro is a dormant volcano located in Tanzania.

The ladies of Sistahs to the Summit appeared on “CBS Mornings” to discuss the difficulty of the journey and their plans to make history. The women, who are all Black women, range in age from 31 to 53.

All of this began when Erica, who was turn 50 soon, proposed hiking Mount Kilimanjaro to her friends. Erica mentioned that she and a friend have been discussing it for almost five years.

Erica felt that climbing a mountain in Africa would be the best way to celebrate her birthday in style. This started the formation of their eight-day journey. 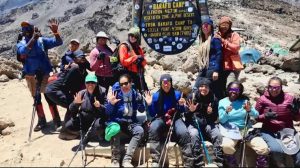 Originally, 18 women responded but ultimately 14 decided to take the trip and tackle on the challenge. Along the way two women sadly had to turn around due to altitude sickness. The ladies started training as soon as they decided on a date.

During the summer, some of the women started the train at Martha’s Vineyard Others began to walk more frequently, walking to the grocery store and using the treadmill as well.

The women describe themselves as a “high maintenance group,” wanting to make sure that they have access to at least three bathrooms and showers for each of them.

But in the end, they opted to give them up because they were deemed as more of a burden than a luxury. 72 porters assisted the women as they went up the mountain by carrying their belongings.

The majority of the women concurred that walking up the mountain was the most difficult thing they had ever done during a rapid-fire question and answer session.

A majority of them gave the yes answer when asked if they wanted to give up. In addition to forming lifelong companions, all 14 ladies agreed—with the exception of two—that they would never do it again.

They all had lunch together to celebrate their accomplishment and created a TikTok to “Puppet” by Beyoncé.

Why Gisele Bündchen and Tom Brady Decided to Divorce

“Ladies need to know there’s nothing wrong with wooing a…

Beware of enemies pretending to be friends