Taylor Swift made the “whole place shimmer” at the 2022 American Music Awards on Sunday as she won six trophies at the ceremony including the award for “Artist of the Year.”

Swift, who won her seventh “Artist of the Year” award in her career, became the first artist in the ceremony’s 50-year history to win 40 AMAs on a night that featured wins by other icons including Beyonce, Kendrick Lamar and Harry Styles.

The ceremony, hosted by Wayne Brady, also featured a tribute to the 2022 “AMA Icon Award” winner Lionel Richie where Stevie Wonder and Charlie Puth played a number of songs from Richie and the Commodores.

The pair later closed the musical tribute with a performance of “We Are the World” alongside Ari Lennox, Smokey Robinson and others. 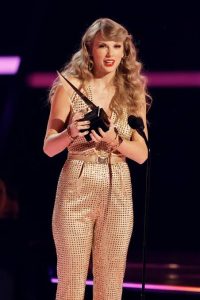 But the night belonged to Swift, the most-awarded artist in AMAs history ahead of Michael Jackson and Whitney Houston, who took home wins for her “All Too Well (Taylor’s Version)” music video and her album “Red (Taylor’s Version).”

Taylor Swift, in her “Artist of the Year” acceptance speech, touched on the number of albums she’s released in recent years and how it’s tied to her fans’ urge to hear the music she makes.

″So I have the fans to thank, essentially, for my happiness and I love you more than I can say, I cannot express how unbelievable it is to me that I still get to do this and that you still care.”

The AMAs “New Artist of the Year” winner Dove Cameron, who identifies as queer, addressed the shooting during her acceptance speech and highlighted the importance of queer visibility.

Nick Cannon Welcomes Baby No. 9, His First with Model…

3 people died in a shooting at a Maryland manufacturing…

10 facts about Malala Yousafzai that will inspire Nigerian…