By Kate Last updated Nov 21, 2022
0
Share
Imani Perry has received the 2022 National Book Award for Nonfiction for her book South to America: A Journey Below the Mason-Dixon Line.
Perry, who is currently a professor of African American studies at Princeton, is also a contributing writer to The Atlantic.

Her newsletter for the esteemed publication, entitled “Unsettled Territory,” analyzes the complexity of American history.

“I write for my people,” Perry stated as she accepted the award Wednesday. “I write because we children of the lash-scarred, rope-choked, bullet-ridden, desecrated are still here, standing.” For South to America, Perry visited more than a dozen Southern cities to explore and understand the horrifying nature of American history. 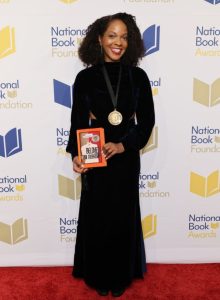 Imani Perry explained her goal of her seventh book in her newsletter. “In this book, I ask readers to travel with me, through the landscape but also through history. It is more invitation than proclamation, more exploration than argument,” Perry explained.

“And it is a book of encounters. And there were a few new encounters over the past week that I wanted to share here, because they resonated deeply with the why and what of this book.”

In July 2023, Perry will join Harvard’s Faculty of Arts and Sciences. Earlier this year, The Harvard Gazette published an excerpt from the South to America which powerfully illustrated the depth of her research:

“Staying alive on the grounds of your ancestors’ murder and abuse is no small matter. It requires a living witness to their alchemy. Go into a church, find the old woman singing, listen to how her voice, even if cracking, takes up much more space than that to which she has been resigned. Like the laws of slavery, Jim Crow laws were defied every time people on the darker side of the colour line opened their mouths and released sound and air from the diaphragm into the ether. Fighting there is heroic. And I mean fighting for freedom, of course, but also simply fighting to live. That struggle has never ceased.”

Jada Pinkett-Smith recalls health scare that made her turn…