Project Alert, a non governmental organization based in Lagos and a key implementing partner for the Spotlight Initiative, organized a 2-day Workshop titled “Capacity Building for Girls and Women CSOs/Rights Groups on Referral Services for Victims of SGBV” where key stakeholders discussed issues surrounding the violence and discrimination against women and girls and how this scourge that has eaten deep into our society can be eradicated.

The workshop focused on capacity building for girls and women Civil Society Organizations and Rights Group on referral services for victims of sexual and gender based violence.

Mrs. Josephine Effah-Chukwuma, Executive Director Of Project Alert stated that the Spotlight Initiative project is a multi-year initiative by the European Union (EU) and the United Nations (UN) focused on eliminating all forms of violence against women and girls globally.

She noted that the UN agencies include UN Women, UNICEF, UNFPA, UNDP and Spotlight as the name suggests means focused attention.

Violence against women and girls is beyond boundaries, cutting across tribe, religion, education, social status as data and statistics show in recent times, so all hands must be on deck in tackling the menace.

According to Effah-Chukwuma, the objectives of the Spotlight Initiative is to eliminate violence against women and children, introduce the Spotlight Initiative component  on building the capacity of CSOs & Rights Groups to respond to and give referrals to Gender Based Violence victims and to sensitize stakeholders on the role of state and non-state actors (CSOs) in eliminating gender-based violence.

“Spotlight initiative supports concrete measures to end violence in our communities, states and nation. The initiative gives prominence to prevention, protection, and provision of services to ensure women’s empowerment, she said.”

Effah-Chukwuma mentioned that the Spotlight Initiative Project has 6 intervention pillars that mutually reinforce themselves, namely Laws & Policies, Institutions -strengthening national government and regional institutions, Prevention -Promoting social norms and attitudes that help prevent violence against women and girls. Others are Services – provision of high-quality essential services for survivors, Data – improving the quality and accuracy of data on violence against women and girls, lastly, Women’s movements which is basically promoting a strong and empowered civil society and women’s movements. 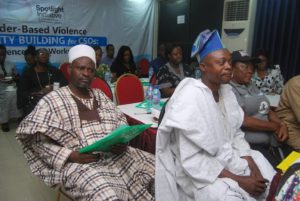 She said: “The Initiative will address legislative and policy gaps, strengthen institutions, promote gender-equitable attitudes, and provide quality services for survivors and reparations for victims of violence and their families.”

She revealed that the project activities include mapping of service providers and community groups, advocacy visits to key stakeholders in some states to intimate them about the project, development of/production of Information, Education and Communication (IEC) materials on Sexual & Gender Based Violence, Sexual Gender Based Violence to be shared to government agencies, civil society organizations and communities.

She stated that the ability to see cases through mainly impacted by lack of trust in government, agency mediation, police, judicial system makes it hard for victims of domestic violence to get justice. 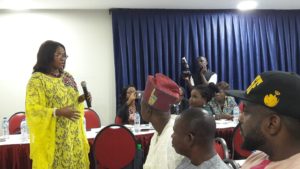 Managing partner, Partnership for Justice Founder, Mirabel Centre, Lagos, Itoro Eze-Anaba said that child abuse is a form of abuse that includes sexual activity with a minor. It could involve physical and non physical contact between a perpetrator and a child.

Eze-Anaba stated that perpetrators are known to the family and 93 percent of the victims under 18 know their abuser.

She however noted that perpetrators may not necessarily be adults as they may be older siblings, children’s play mate, family member, teacher, care taker or parents of another child.

According to her, some of the challenges that make eradicating child sexual abuse difficult include threats to survivors and loved ones, impunity, blackmail, stigmatization, likelihood of sexually transmitted diseases and pregnancy.

She however mentioned that Mirabel center is willing and committed to help survivors of sexual abuse pursue their cases so that perpetrators are brought to book to serve as deterrent for others with the intentions of violating women and girls.

Eze-Anaba concluded by saying that rape is not a women’s issue but a social and human issue as silence is a position against the survivor. She advised people to believe victims, speak out and break the silence against child sexual abuse. 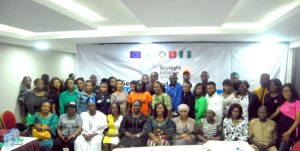 Vincent Dania of the African Center for Leadership, Strategy and Development who spoke about Male involvement in eliminating violence against women said In 2018, the Lagos state ministry of Justice, through the  Domestic & Sexual Violence Response Team (DSVRT) handled 930 cases of violence against women, most of the time perpetrated by men.

He urged men not to be quiet or neutral when a woman or girl is being violated, and enjoined them to talk to family, friends, community members, co-workers and the young people around them about treating women with respect.

He stated that violence against women and girls must be seen as humanity’s problem. It’s an epidemic men and women must come together to address before it makes life unbearable for all of us.

In conclusion, Josephine Effah-Chukwuma said that the outcome expected of this project, is for women and girls who experience violence and harmful practices to use available, accessible, acceptable, and quality essential services, including long term recovery services from violence.

The Spotlight Initiative in Nigeria is aimed at supporting a Nigeria where all women and girls, particularly the most vulnerable, live a life free from violence and harmful practices.

I don’t like money, true love is enough for me

If you have a beautiful female friendship, flaunt it

Ese Walter shares experience with stranger that left her…