A statement released by DSP Abimbola Oyeyemi, spokesperson of the state police command, says the suspect was arrested following a complaint lodged at Idanyin divisional headquarters by the son of the victim, who came with his mother to the station and reported that at about 4p.m. of the said day, while his 60 year old mother was in her apartment, the suspect broke into the apartment, and had sex with her forcefully. 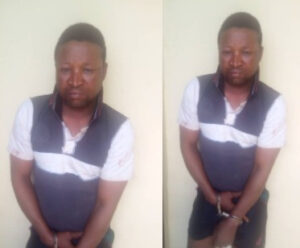 ”Upon the report, the Dpo Idanyin division, CSP Olayinka Kuye, detailed his detectives to go after the suspect. He was subsequently traced and apprehended, while the victim was quickly taken to hospital for medical treatment.

The suspect has made confessional statement that he actually committed the crime. ” the statement in part read

Oyeyemi added that the state Commissioner of Police, CP Edward Awolowo Ajogun, has ordered the immediate transfer of the suspect to state criminal investigation and intelligence department, for further investigation and diligent prosecution.

So Mr. Adesina Adebowale wasn’t taught by his parents to keep his hands to himself. He wasn’t taught that raping a woman is a crime. He was told that respecting women’s bodies is very important.

I hope the system teaches him that women are not play things and that he gets brain reset in prison. This society should stop raising men who think they are entitled to women’s bodies.

Until the supposed good men in Nigeria start reporting their fellow men for raping and sexually assaulting women, these crimes will continue unabated.

Until this society puts strict punishment in place for such men, they will continue to hurt women.

Brittney Griner unable to speak to wife Cherelle Griner over phone due to U.S.…

“Please release him so he can meet me alive”…

7 signs your partner is belittling you