Now, the lady in question has backtracked and confessed that she lied about the post she made.

Ujunwa Olivia wrote a post to herself pretending her alleged rapist wrote it. Ijeoma Chinonyerem pointed out that the way the post appeared shows that she wrote it herself and people on Facebook started dragging her.

Olabisi Ekwueme Ajai wrote this post to clarify her stand and apologize to Ijeoma Chinonyerem for defending Ujunwa Olivia. 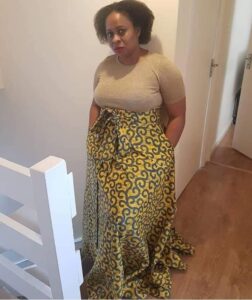 “Wow! Just wow! Lol. I say I will NEVER chook mouth in Facebook drama again but this one happened. And because I was involved, I will make this one post on it.

Ujunwa Olivia, I stuck my neck out for you. I shielded you and said that I was the one that told you to make money from your story. Because the backlash you were facing was much.

What I said was give me details of your book and let me do a post on it for you. I will market it for you. You went and put your bank details and all on YOUR own wall.

Even then, I assumed that you misheard me. I should have known then, that you were up to mischief.

I asked you SEVERAL times if you were saying the truth and you assured EVERY TIME me that you were. You explained that someone whom you had worked with had access to your profile. I started having doubts about your story but because I am fiercely LOYAL, I stayed with my stand. Several times, I have thought of doing a post to extract myself from the mess and defend myself from what happened but I felt that would be throwing you under the bus.

So, I stayed quiet. Even recently, someone insulted me over that stand. I still did not push you under the bus.

You came crying to me about how you did know what you did to offend Ijeoma and how you had even tried to do business with her. I did a post for you. Because I felt that even IF you were not being totally true, you were raped at least and a rape victim needs all the support they can get.

I not only defended you online, I also connected you to Pamela Udoka, a sex therapist to help you.

I hope that this post that you made helps you find closure. I really hope so. I believe you need healing and I hope you get it.

Since we are apologising, Ijeoma Chinoyerem, I am sorry for taking her side against yours. I thought that at the least, she had been raped and was trying to shield her from the backlash