Nigerian activist, Aisha Yesufu has taken to social media to celebrate as her dyslexic son, Amir Yesufu, graduates from a university in England.

According to Aisha Yesufu, her son defied all medical odds to bag a degree, despite reports that he wouldn’t be able to attend a university because of his condition.

She disclosed that she had already succumbed to fate but God proved her wrong and her son is now a graduate.

The co-founder of #BringBackOurGirls movement shared a video of her dancing with her kids and wrote:

“When you were told your son will not be able to go to university. When you had prepared your mind to him not being a graduate and God proves you wrong. At 14, we took him to a school in England, today at 22 he is a graduate.
#Dyslexia
#AmirYesufuIsAGraduate”. 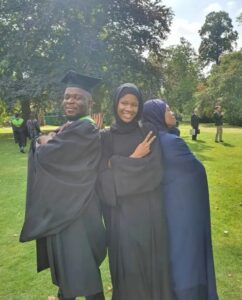 Aisha Yesufu was born December 12, 1973. She is a Nigerian activist and businesswoman.

She co-founded the #BringBackOurGirls movement, which brings attention to the abduction of over 200 girls from a secondary school in Chibok, Nigeria on April 14, 2014, by the terrorist group Boko Haram.

Aisha Yesufu has been a prominent member of the End SARS movement, which began in 2017 and draws attention to police brutality in Nigeria and draws its name from a controversial police unit in the Nigeria Police Force called the Special Anti Robbery Squad (SARS).

A photograph of Aisha Yesufu wearing a hijab at an End SARS protest became an iconic symbol of the movement.

Yesufu has said of the End SARS protests, “I will not be an irresponsible parent and leave this fight for my children. I am ready to sacrifice my life for my children to live. I brought them to this world, and I need to fix the world I put them in.”

Aisha Yesufu was among BBC’s 100 Women in 2020. She was included in a list of the Top 100 Most Influential Africans by New African  magazine in 2020 also.

#BBNaija: “If many of you had Angel’s confidence you will go naked” – Blessing Okoro tells Angel’s critics

Nigerian Man cries out after his church Pastor married his…