Blessing Okoro recently announced on social media that she’s now a proud owner of a house.

This is happening two years after she was dragged for passing off billionaire Onye Eze’s house as hers on Instagram.

However, as fans anticipate the unveiling of the new house, Instagram blogger, Gistlovers, called out Blessing Okoro, accusing her of deceiving the public for the second time.

According to Gistlovers, the new house Blessing Okoro is claiming she built belongs to “her married lover.”

Reacting to the allegation, Blessing Okoro took to her Instagram page to reiterate that the house, which she’s set to launch on Christmas Day belongs to her. 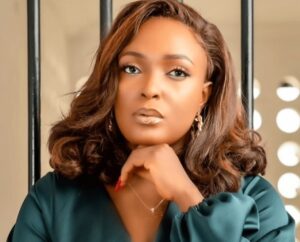 Sharing a photo of the magnificent structure, she wrote, “25th December lovers we launch it. It belongs to Blessingceo from foundation to finish…. Wait until u see my Lagos office lovers 🙏.”

omo_jejeje Credit to from @gistloversblog11 Hello tueh tueh, yet for the second time Blessing don lie again, well I believe say anybody wey believe Blessing after the onye eze saga na mumu, the house wey this geh dey shout up and down does not belong to her.

It belongs to her baby daddy who is a married man, the wife of the baby daddy no born so the baby daddy and wife adopted two kids, Na only blessing born biological pikin for am, Na why this werey dey jump like crayfish wey enter hot oil.

Don’t follow all these lifestyle on IG una go just get hypertension, Blessing is just flaunting for the man as na police pension money him take build the house. The man is from IMO state. Him name Na NN, he is the director at Police Pension FHQ Abuja.

Money meant for old people them carry an build house come use blessing as the face, she kuku happy when be say na wetin she like be that, Omo ale oniro alara gbigbe.

Blessing can’t boast of 5 million as she is, she lives for the gram. Always condemning baby mama and she is sitting on the table, her own baby mama is hiding sef, house wife must not know her.

“Friendships are so fickle these days” – Tboss says

“The moment you don’t have money to give, you become the worst person” – Annie Idibia laments about ‘entitled friends and family members’

Woman lured with fake job offer is kidnapped and impregnated…