Hatchett was attending the Georgia Sheriff’s Association winter training conference when the incident occurred on Jan 18.

“When I saw his hand go down on her left breast and I reached over, grabbed his hand, took it off of her and basically said, ‘What are you doing?’ and, ‘Get your hands off of her,’” Brown told reporters at 13WMAZ, noting that he had to pry Coody’s hands off the judge’s body. The former Sheriff said he wished he could have done more to help her.

The shocking exchange occurred as Brown was introducing Hatchett to the association president and another sheriff at the Renaissance Atlanta Waverly Bar after hours. Coody’s arrest warrant reported that the assault happened after Hatchett asked him where he was from–to which he replied, “the heart of Georgia.” 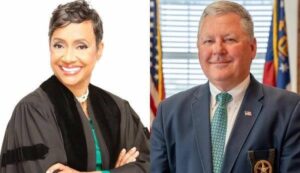 That’s when Coody allegedly placed his hands on Hatchett’s breast three times to emphasize his point.

Brown said he quickly escorted Coody away from the judge, who was in utter shock.

Coody has since been charged with sexual battery, according to WSBTV.

The media normally does not identify sexual assault victims, but according to Brown, Hatchett wanted her story to be told to help empower other women.

“She’s very passionate about telling her story at some point in time, if for no other reason, for the hundreds or ladies out there who may have been victims of some time of sexual assault, but have not said anything because they are afraid to do so,” Brown added, noting that he too felt as though he should “say something” about the incident.

“..The accusation is now out. It’s unsealed. The judge had no problems with it being unsealed, because she’s a lot stronger now.”

Unfortunately, this isn’t the first time that Coody has been in hot water. In 2007, he was fired from his position of more than 20 years with the Georgia State Patrol after he was involved in an altercation, the Atlanta Black Star noted.

Coody was also flagged for improper conduct and ordered to undergo 24 months of probation and anger management counseling by the Peace Officer Standards and Training Council. He served as a deputy sheriff for three years before he was employed with Bleckley County as a sheriff in 2017.

In 1990, Judge Hatchett became the first Black woman to serve as Chief Presiding Judge of a state court in Georgia overseeing Fulton County’s Juvenile Court. She’s the former host of the Emmy-nominated courtroom show “Judge Hatchett” and she currently stars in “The Verdict with Judge Hatchett.”