A woman who has two vaginas has opened up about her rare condition, saying she gets two periods and can get pregnant with two children at once — one in each uterus.

Leanne Bell, 37, from Arizona, was born with uterus didelphys, an abnormality in which a developing baby girl grows two uteruses instead of one. Some women, like Leanne, also have two cervixes and a thin wall of tissue that creates two separate vaginas.

The TikTok user, who is known as @theladyleanne on the platform, has been candid about her condition, and in a recent video from earlier this month, she answered some of the most common questions she receives.

‘My body is about to blow your mind, in a weird way. Essentially, I was born with extra body parts — extra female body parts,‘ she said. ‘I was born with two vaginas, two uteruses, and two cervixes.’ 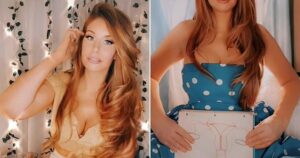 With double reproductive organs, Leanne explained that she goes through everything other women do — but twice — including monthly menstruation.

‘I have to have my two periods that suck,’ she said. ‘They’re usually at the same time, but sometimes not. I also have to go get two pap smears, which sucks. It’s not comfortable. I wear two tampons, yes. Like I said, whatever one woman does, I do it twice.’

In a previous video, Leanne detailed how painful her periods can be, saying she sought treatment from her gynecologist for severe cramping before she found out she had two uteruses.

‘The pain is excruciating. They put me on pain meds, but they made me feel so sick that that didn’t end up working,’ she recalled, saying she still struggles with agonizing periods.

‘The first few days, I am just bedridden and in pain,’ she explained. ‘I dread that time of the month so much. I know a lot of women do. It’s just those few days at the beginning I spend in bed. It just feels like I am wasting my life.’

10 Causes of Cryptic Pregnancy Women Of All Ages Should Know

Woman, people can dislike you, deal with it

Why the feminist movement became necessary for Nigerian…