James said Trump “falsely inflated his wealth by billions of dollars” to enrich himself and his family and the lawsuit seeks to effectively shutter the former president’s namesake business, the Trump Organization.

“Mr. Trump thought he could get away with the art of the steal, but today, that conduct ends,” James said. “There aren’t two sets of laws for people in this nation: former presidents must be held to the same standards as everyday Americans.”

Letitia James said she has referred some of the allegations to federal authorities, including the Manhattan U.S Attorney’s Office and the IRS for possible criminal investigation.

The extraordinary lawsuit, which also names children Donald Trump Jr., Ivanka Trump and Eric Trump, seeks $250 million in penalties; a permanent ban on the Trumps from running businesses in New York; and the legal action attempts to block Trump and the Trump Organization from purchasing commercial real estate in New York for five years. 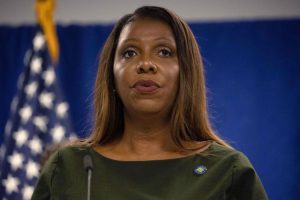 James described an “astounding” pattern of fraud that allegedly represented a “violation of the law.”

The lawsuit alleges that Trump, with the aid of his children and senior executives at the Trump Organization, falsely inflated his net worth by billions of dollars “to induce banks to lend money to the Trump Organization on more favorable terms than would otherwise have been available to the company.”

The false valuations, state officials asserted, also sought to induce insurers to provide coverage at lower premiums. For a decade, Trump and the business “created more than 200 false and misleading valuations of assets on his annual Statements of Financial Condition to defraud financial institutions,” the attorney general said.

The Trump family and political allies fired back Wednesday, accusing the attorney general, a Democrat, of engaging in a politically motivated campaign against the former president and his family.

Woman lays hefty curses on kidnappers who k!lled her husband after collecting  ransom

I have no intention of getting married in my life – Singer…