New photos of Pastor Biodun Fatoyinbo, the lead Pastor of Commonwealth of Zion Assembly popularly known as COZA have left people concerned about his health.

It is rumored that the clergyman has been rarely seen in public, and the photos shared by COZA shows him having a rather weary look.

Fatoyinbo, his wife Modele, and other members of the church were pictured at Old Trafford, Manchester England.

People have inquired about Fatoyinbo’s health and some have offered prayers to God for him to be healed. 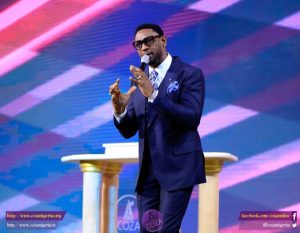 Pastor Biodun Fatoyinbo has been embroiled in several scandals lately and he apparently took the decision to stay out of public eye.

In January this year, he was accused of owing salaries of church workers.
Nnenna Kalu-Ude, a former choir leader of the church who made this known in a post on social media, said many of the persons affected were afraid to speak up.

In 2019, Ese Walter who first publicly accused Pastor Biodun Fatoyinbo of sexual abuse in 2013, has revealed that she recently attended Commonwealth of Zion Assembly (COZA) which he founded.

The Lawyer turned Yoga instructor revealed that she attended the church where her alleged sexual relationship with the COZA founder began, in disguise.

Ese said she recently attended COZA for two reasons; to gauge how far she has come in her healing and also to have an experience in the church building she contributed her one year NYSC allowance for.

Social media was set on fire in 2013 after Ese Walter made a public confession about her illicit love affair with Fatoyinbo while she was studying for her master’s degree in London.

According to her narrative, Biodun Fatoyinbo had gained her trust, favour and confidence over the one year period she was attending his church before she travelled abroad.

While hers was not particularly a rape incident, she alleged that Fatoyinbo initiated the sexual move that would turn into an illicit s£xual affair that lasted for days.

“If your boyfriend only takes you out at night, he’s not single” – Uriel Oputa says

Busola Dakolo is the face of courage states Ufuoma McDermott