Former wrestling star Mandy Rose has reportedly earned more than $500k from her FanTime account since her controversial departure from WWE.

The 32-year-old star was fired by the wrestling organization on Wednesday, December 14 due to the explicit images she shared on the subscription-based platform, which was “outside of the parameters of her WWE deal.”

Although the dismissal raised many eyebrows, it also turned out to be beneficial for Rose’s business on the site. Rose’s agent Malki Kawa told TMZ that the former NXT Women’s Champion has made a whopping $500,000 from her FanTime page since being sacked.

Kawa also predicted that Rose, whose real name is Amanda Rose Saccomano, will become the world’s newest self-made millionaire by Christmas, which is just 5 days away. 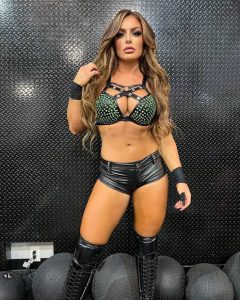 Fans can subscribe to unique content from creators on the platform, which is similar to OnlyFans. The monthly fee for Rose’s FanTime page is $40.

In recent days, pictures of her and her fiancé Tino Sabbatelli in the shower began circulating online. The clicks fell somewhere between R and X-rated, as per reports from New York Post.

The news of Rose’s release came after she lost her NXT Women’s Championship title to Roxanne Perez on Tuesday, December 13. Rose had been the NXT women’s champion for more than 400 days before being defeated by Perez. She made her WWE debut in 2015, in the sixth season of ‘Tough Enough’.

WWE’s ire at Rose’s explicit images perhaps springs from a rule brought by Vince McMahon in 2020. McMahon, the company’s then-CEO and Chairman, wrote a letter to all wrestlers in 2020 ordering them to stop using any third-party sites where they exploit their names and likeness in ways that are harmful to the business.

“Some of you are engaged with outside third parties using your name and likeness in ways that are detrimental to our company,” McMahon, who stepped down from running WWE earlier this year, wrote at the time. “It is imperative that these activities be terminated within the next 30 days (by Friday, October 2). Continued violations will result in fines, suspension, or termination at WWE’s discretion.”

My husband drugged me every night before r@ping my niece – Wife of Lagos doctor, Femi Olaleye tells court

I hurt you deeply, I take the blame – Yul Edochie tenders apology to first wife, May

Best friends who got pregnant at the same time share…

Why do many Nigerian women fake orgasms?