The things a woman will do and be called Olosho, men will do it and be hailed says Singer Simi

Simi has responded to those who criticized her for writing that “many of our parents raised their girls and let the boys raise themselves.”

The singer took to Instagram to point out the difference in how boys and girls are raised, while asking parents to do better at raising their sons. 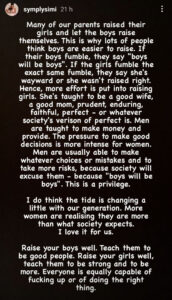 People responded and asked her why there are many wayward women if girls were indeed raised better.

The singer responded, pointing out that the same things women do that earn them the wayward tag, boys do it and they are hailed.

“Bruh, if you are triggered by my last post. Take one minute and think why.

Seen a lot of guys saying “If they raise the girls, why are there so many oloshos?”

First of all, f*ck you. Second of all, the things that a woman will do and be called olosho, man go do am, dem go hail am call am Baddest! Why? Because “BOYS WILL BE BOYS.”

You know it’s true, you just don’t like how it makes you feel. 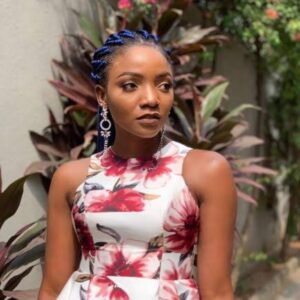 This is obviously not an attack ffs. I’m saying both girls and boys should be raised with the same (good) standards.

Men should be taught how to respect the way they want to be respected, but they should also be allowed to be vulnerable. Many men suffering and dying inside waiting for permission to cry.

Obviously, nothing is perfect and we’ll all make poor choices sometimes, but it shouldn’t be because nobody taught you better. 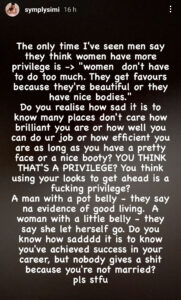 Simi added that the only time men say women have it easier is when they point out that women get favours for being beautiful.

She then asked if it isn’t sad that women aren’t rewarded for their brilliance but because of how they look.

10 habits every woman should quit for a happy life