#BBNaija: Tega speaks on her husband not wanting their marriage after she is out of the Big Brother house

Married Big Brother Naija housemate, Tega Dominic has disclosed what her reaction would be when her husband says he no longer wants to be married to her after she is out of the Big Brother House.

Tega who was having a conversation with Boma and Liqourose, stated that she will move on with her life because she’s the one who has everything and the fame.

Prior to this conversation, the housemate has repeatedly said that she has her husband’s backing to do anything in the house.

Her husband who also reacted to fellow housemate, Saga sucking her boobs, had said that she was living up to the content he signed for on the BBNaija show. He also professed to his love to his wife.

BBNaija Tega only gets along with people who are open and jovial. She is very sensitive and tends to know when to speak with people and when not to. Doing this always helps her avoid trouble. 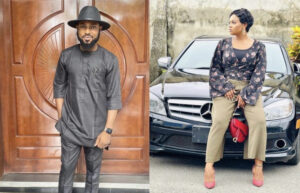 She is the kind of person that has a passion for fashion and designing; she said that if she has the opportunity to become Big Brother for a day, she will bring in clothes and makeup for her BBNaija housemates.

Tega is a business girl and an entrepreneur who owns her own brand. Her business has been her major source of income, fetching her so much money.

BBNaija Tega is a party type that loves dancing, travelling, photography and swimming.

Her “small circle of friends” describe her as easy going and a great cook – although she thinks that’s debatable.

Tega Dominic sees herself as outgoing, enthusiastic and passionate about the things she loves.

Young Lady Ditched Her Boyfriend Who Tried To Bring His…

Tunisia’s New Prime Minister Is The 1st Woman To Lead…

The perpetrators will pay heavily for this crime –…