There is evidence that women have sex on the brain just as much as if not more than their male counterparts, according to a new study.

Scientific researchers have found the brain region linked to genital touch in women and it seems better developed in women who have sex regularly.

The study, recently published in the Journal of Neuroscience, analysed the connection between touch and cerebral development in 20 adult females. 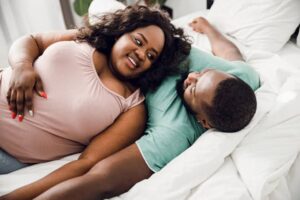 As part of the research, female volunteers – between the ages of 18 and 45 – had their clitorises stimulated by a vibrating object placed above their underwear, while their brains were scanned.

Researchers also asked female volunteers how frequently they had had sex over the past year.

As the device vibrated, the somatosensory cortex region of the brain was activated.

Researchers then measured the thickness of that brain area, finding it was bigger in females who reported having more sex.

“We found an association between the frequency of genital intercourse and the thickness of the individually mapped genital field,” explains study co-author Dr. Christine Heim – a professor of medical psychology at Charite University Hospital in Berlin.

This means that the more sex a woman has, the bigger the region of the brain.

This isn’t the first study to look into the benefits of sex on the brain.

Back in 2016, scientists at McGill University in Canada found young women who have regular sex have an easier time remembering things than their less sexually active counterparts.

Still, the researchers say more research is needed, as the relationship between sexual stimulation and brain activity and development in women is gravely understudied.

In the meantime, however, the main takeaway seems to be that more sex means more brain, and more brain means more sex, which seems like a win-win for everyone involved.

Back in a different but probably not so distant time, a study suggesting that the sex part of women’s brains gets bigger with more sex probably would have been cause for widespread moral panic claiming sex turns women into lascivious heathens who present a danger to society.

Fortunately, today, such a study means that sex is good for women and their brains and they should have more of it.