Elizabeth Anne Holmes, founder and chief executive of Theranos, a now-defunct health technology company that soared in valuation after the company claimed to have revolutionized blood testing by developing testing methods that could use surprisingly small volumes of blood, was found guilty of fraud and conspiracy on Monday January 3.

Holmes who was the the subject of an HBO documentary as well as a forthcoming Hulu miniseries starring Amanda Seyfried, was charged with 11 counts of fraud for claims made to investors and patients of her Silicon Valley blood-testing company, Theranos.

She was guilty of four of the 11 charges she faced in her fraud trial. The former Silicon Valley darling was convicted of one count of conspiring to commit wire fraud against Theranos investors and three counts of fraud in connection to wire transfers. 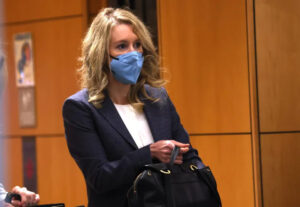 The jurors found her not guilty on four other counts, three of which related to defrauding patients, and failed to reach a verdict on three others.

Reporters in the courtroom said Holmes, 37, maintained a stoic demeanor as the judge read the verdict, then she gave her partner, parents and two friends hugs before leaving the room. Her attorneys are expected to appeal the decision.

Each count carries a penalty of hundreds of thousands of dollars in fines and a maximum sentence of up to 20 years in prison, which she would likely serve concurrently. 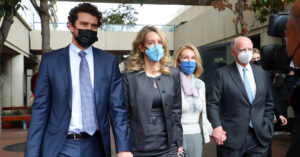 This is coming after jurors told Judge Edward Davila on Monday, seven days after they began deliberations, that they were deadlocked on three of the 11 counts Holmes was facing for wire fraud and conspiracy to commit wire fraud.

Elizabeth Holmes first rose to prominence in 2014 as the founder and CEO of healthcare start-up Theranos, which duped investors out of millions by falsely purporting that its technology could run hundreds of medical tests using just a few drops of blood.

In 2015, Wall Street Journal journalist John Carreyrou reported that the machine Holmes was selling — dubbed The Edison — did not actually work, and that the company was using outside technology and other subterfuge to fake positive test results. Federal authorities then investigated Holmes, indicting her in 2018. 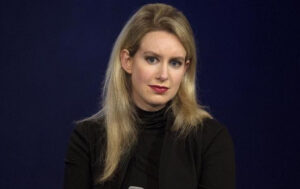 During her trial, Holmes’ defense attorneys sought to portray her as naive, saying she didn’t mean to defraud investors. According to ABC, Holmes’ attorney Kevin Downey said Holmes never cashed out any stock even as the company’s fortunes tumbled.

But prosecutors said Holmes knew exactly what she was doing. “The person on trial is 37 years old,” U.S. Attorney John Bostic said in his closing arguments, The Wall Street Journal reports. “That is certainly old enough to know the difference between right and wrong.”

In addition to accusations of misleading patients and physicians about the efficacy of Theranos’ blood tests, Holmes was also accused of lying to investors in 2015, telling them that Theranos would generate $1 billion in revenue when she allegedly knew the company would only generate a few hundred thousand dollars that year.

Betty White’s cause of death revealed, agent denies she got booster days before

My Influencing Pay for 3 months is what your favorites are signing for one year – BBNaija Star, Queen throws shades

How Tonier Cain-Muldrow rose from the ashes of drug…