Use ‘Fear And Dread’ To Control Your Wife As God Intended, Christian Marriage Counselor Says

Hold your horses ladies, we have a new winner from the game of Christian marriage advisers or preachers and how to ‘train’ your wife.

Namely, we are talking about a column called “Female dread” by Rollo Tomassi who explains that Christian men seek intimacy with women all wrong.

Tomassi says husbands should make their wives “unintentionally uncomfortable” in order to achieve that “rough, hard-core, intercourse men never thought would have.”

Larry Solomon of Biblical Gender Roles agreed with this although from a biblical perspective writing: “So should a wife Biblically speaking have a little healthy fear or dread of her husband? Absolutely!”

According to him the Bible says that women should submit to their husbands “’as unto the Lord’ (Ephesians 5:22)”. Solomon then proceeds to explain that he believes that most Christian husbands fear their wives. 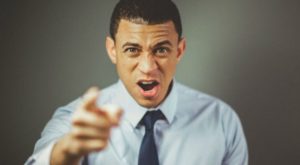 “Men show their wives they are either afraid to lose them (be alone) or afraid of the prospect of divorce and the financial or child custody repercussions that it may bring.”

He suggests that Christian husbands should use what he calls the “there’s the door” method. According to him, it should go about like this:

WHEN A WOMAN ACTS OUT IN REBELLION TOWARD HER HUSBAND AND TRIES TO ACT AS IF SHE DOES NOT NEED HIM OR THAT OTHER MEN WOULD TREAT HER BETTER THE CHRISTIAN HUSBAND SHOULD SAY TO HER: “THERE’S THE DOOR”. WILL SOME WOMEN BE FOOLISH ENOUGH TO WALK OUT THAT DOOR? YES, ” HE SAYS. ” BUT THE MOMENT A MAN ALLOWS HIS WIFE TO PUT HIM IN A POSITION OF FEARING HER, RATHER THAN HER TO FEAR HIM, THE RELATIONSHIP HAS JUST CHANGED FROM THE DESIGN GOD INTENDED IT TO BE.”

Solomon adds that there is a limit to what a husband needs to provide for his wife and that some things should be withdrawn if she gets out of line.

“I don’t just mean she just rocks his world one night, and then he lavishes her with all these things. No – she sees that in order to get ‘some’ of her wants met she must FIRST reverence her husband outside the bedroom and she must ravish him inside the bedroom and this becomes the pattern of her behavior toward her husband, he explained.

”If either the reverence or ravishing goes down, he pulls back on these other things so she understands the correlation.”

I am shameless says Tonto Dikeh