A Nigerian lady has asked for help after a man she met on Facebook threatened to spread fake rumours of her death on social media after she rejected his romantic advances.

According to the lady identified as Lilian Agbolor, the guy wooed her on the platform and, after she declined, he promised to get back at her. The man threatened to make a false obituary he had designed with her photo go viral.

Sharing snapshots of the message she received man she wrote, “This man here came to my inbox to toast me but I didn’t respond to him instead he threatened to carry rumours about me that I’m dead, I don’t know him from Adam”.

“Hello my people, una Weldon oooo, I’m the girl that posted about that guy that wanted to defamed me and people where asking if I ate his money hmmmm, I don’t know him from anywhere, never met or seen him before”. 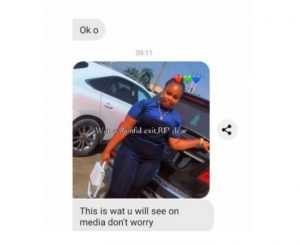 Ordinarily, when their advances are rejected, most men respond aggressively. When they are not insulting or defaming the woman in question, they do anything and everything to hurt her, either physically or her feelings.

Tales have, for instance, been told of men who play spoiler for such women, spreading malicious lies about them. Or even harm the men who get lucky with women who turned them down in the past.

In some instances, some men would tarnish such women’s name, sensationally claiming they practice witchcraft,  or claim they have had sex with them just to spite their new love interest.

Many men feel like they are the best thing to happen to women. These men don’t react well to rejection. They believe that men are superior to women and women must not reject men or turn down their advances.

So when their advances are rejected, men feel like their masculinity is being threatened or are being told they are not good enough. Seeing as they are not socialized on how to cope with losing, the only option is anger.

Men’s aggressive reaction to rejection is a by-product of an erroneously set societal narrative, with many expected to play pursuers and always win in the end.

IK Ogbonna and I have parted ways for good legally Sonia…

Woman makes a scene after catching husband with side chick…

Woman cries bitterly after contracting HIV from her cheating…