The heartbreaking funeral of Shanquella Robinson, who died while on a vacation in Mexico, attracted a lot of mourners on Saturday, November 19.

According to reports, the 25-year-old was laid to rest in Charlotte, North Carolina, after she was found dead on October 29 in a villa in Cabo San Lucas.

It was reported that Robinson‘s body was taken to Macedonia Baptist Church by a horse-drawn carriage while hundreds of friends, family as well as community members paid tributes to her. A few mourners also reportedly wore pink bracelets and clothes in her memory while some were seen sticking her picture on their outfits.

Robinson’s neighbor Laviris Smith told Yahoo!, “She was just excited about going on her trip. She sat on my chair and we talked about a lot of personal stuff. We just clicked, and she was like my little sister.”

Earlier, Robinson’s friends, with whom she was traveling, called her death a case of alcohol poisoning but later, an autopsy revealed her back and neck sustained trauma, raising a lot of doubts and questions. 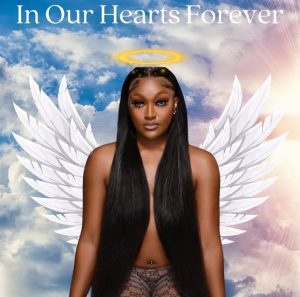 The young woman’s family was desperate to get answers as they feared foul play. Her mother, Salamondra, reportedly said, “Each one of the people that was there with her was telling different stories. They said she wasn’t feeling well. She had alcohol poisoning. They couldn’t get a pulse. They didn’t call us until the very last minute, and then on top of that, they said the maid found her. No one told the same story, so I never believed them anyway.”

“After they said it was alcohol poisoning, we received the autopsy report on Thursday and it said that her neck had been broken and she had a back spasm. There was a crack, the spinal cord was cracked. That took it to a whole ‘another level because that meant somebody had attacked her,” she added.

Robinson’s father, Bernard, also believed that someone killed his daughter. He reportedly told TMZ, “They attacked her…and she naked. She’s not a fighter at all, ma’am. For them to do what they did, ma’am, it just seemed like it was a plot, ‘cause they couldn’t have done that over here, ma’am.”

Meanwhile, a GoFundMe launched to help Robinson’s family has crossed its goal of $350,000 after Brooklyn Nets’ guard Kyrie Irving donated $65,000. The fundraiser read, “My beautiful sister #ShanquellaRobinson, recently went on a trip to Cabo, Mexico, with people she believed were her friends. During this trip, she was found dead.”

3 Nigerian women who are testifying about MMM goodness

Why are there different rules for Nigerian men and women…

Amber Rose distances herself from ‘immature’…