Woman, if you are the only one doing everything possible to make your marriage work, you are married to yourself

Dear woman, if you are the only one doing everything possible to make your marriage work, you are married to yourself. It takes two willing people to make a marriage WORK.

If a man demands you stay away from social media after while he won’t do the same and you doing his bidding is not SUBMISSION, it is you being CONTROLLED. Love is not control and control has no place in a loving, healthy and happy marriage.

Nigerian women should stop using the submission anthem to cover up the fact that they are being abused and controlled by men who are insecure.

Telling other women to do everything they can to make their marriages work while their husbands are not doing the same is not being submissive, it is being abused and controlled.

Control can come in many forms, and not all partners are overly hostile, aggressive, or even obvious in their attempts. It’s important to remember that control also doesn’t have a particular image, meaning that a controlling husband can be of any age, race, sexual orientation, or sociocultural background. Any relationship can turn toxic. 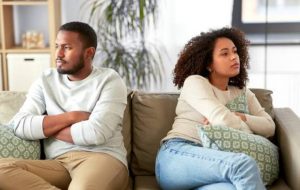 Control can include anything from emotional manipulation tactics to limiting financial access to coercion. Likewise, control tactics often start slowly and progressively worsen as the relationship intensifies. Some controlling spouses may show guilt or remorse for their behaviour, but this is not always the case.

Isolation tactics may be overt or covert. In overt cases, a controlling husband will physically try to distance you from friends or families. In some instances, he might try to convince you that others don’t have your best interest at heart. He may also complain that your loved ones don’t support him- forcing you to pick sides.

Couples should agree on privacy and technology limits together. But a controlling husband will often invade digital boundaries by insisting on sharing all passwords, going through your phone or computer, or even tracking your search history. If confronted, he might be defensive about his behavior or criticize you for “having something to hide.”

Controlling husbands might assume their needs are the only needs that matter. Therefore, he may laugh, criticize, or downright ignore your limits. This is a serious red flag. In healthy relationships, partners aim to respect each other’s needs.

Someone who’s controlling is always trying to undermine your confidence and put you down in private or in public. They seem to want to emphasize your flaws and make you feel self-conscious about your quirks. You’re made to feel like the culprit. A controlling partner will always say that their emotions are your fault.

Some controlling husbands will threaten to leave the marriage, take the children away, or hurt their spouses. These threats are not okay. They’re a dangerous emotional manipulation tactic designed to keep partners feeling helpless and trapped.

15 qualities of the Divine Feminine Energy

12 ways to care for your vagina

Megan Thee Stallion Launches A Foundation In Honor Of Her…